Integrated Science at Avenues – Part III: Practicing What We Preach

In parts I and II of this series, I described how we redesigned the Avenues high school science curriculum in response to broader trends in early 21st century scientific thought. Our approach, which blurs the traditional lines between the disciplines of biology, chemistry and physics, encourages students to explore the big questions of science through holistic, hands-on, project-based learning. This week, I’ll illustrate the benefits of this approach by describing an especially successful project that our ninth grade students completed as part of their investigation into waves and communication.

In January 2015, our ninth grade science students entered into the second semester of science with our waves and communication unit. The premise of this unit is to explore the inner (and outer) workings of the most important device in most students’ lives: the cell phone. We began with a study of waves and wave motion by modeling a simple speaker. Students slowed down speakers to a frequency low enough that they could observe the physical motion (a back-and-forth cycle called simple harmonic motion) and then modeled the motion themselves using motion detectors. The students embodied properties of sound waves, traveling back and forth down the hallway at various speeds, and used a program called GraphicalAnalysis on their iPads to plot their position versus time. The result—perhaps no surprise—was the shape we typically think of as a wave (a sine wave, more precisely).

The next step was to observe more meaningful sound waves. Students used Audacity, a free audio editing program, to record interesting sounds around the school. We looked at these waveform images of many sounds from musical instruments, student voices and the cacophony of the hallways between classes. With a clear picture of these sound waves, students were able to see what makes the sound of a piano different from that of a guitar, even when they play the same note. These waves carry information that is complex and meaningful, yet visually striking and observable. The students were excited by their findings.

Using Audacity, students looked at the waveform images of many sounds.

Moving from a physical medium to more modern means of communication, students turned their attention toward electronics. They built small circuits on breadboards (learning some basic circuit components and properties along the way) and added a simple microphone to their device. With a basic Radio Shack amplifier to plug in their headphones, the students were able to send audible signals to one another through their circuits. They used their iPad apps to observe the changing current in the circuit as they sent their signals and compared this to their audio signals from Audacity. The results were compelling: these waves had the same shape, but the current seemed to always be moving forward. (It is the rate of flow and not the back-and-forth motion of current that causes a wave, the students observed). 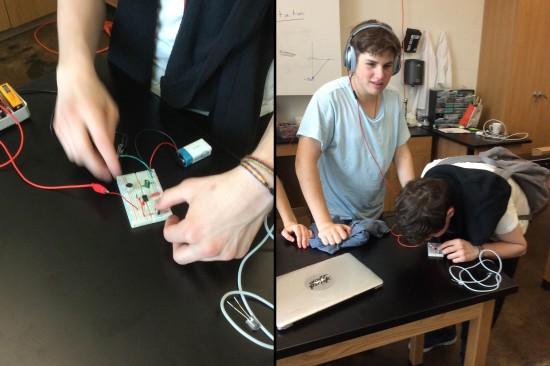 The students built small circuits on breadboards and added a simple microphone to their device.

So how is it that a sound wave is transferred into an electrical wave? The microphone, and its mysterious properties, became our next target. Students worked with solenoids (coils of copper wire) and simple magnets to explore the phenomenon of electromagnetic induction. By applying direct and alternating current to their coils and testing the reaction of small magnets and compasses, students found that the relationship between current and magnetic fields is a unique one. They built crude speakers out of these coils, a small magnet and some simple plastic or paper, and found that moving stronger magnets around and within the coils (changing a magnetic field) induced a current in the coil of wire. Students were able to model and measure the behavior of speakers and microphones with simple lab equipment and apply that knowledge to their model of sound. They could now transmit their sound over further distances by using two of these solenoids as a transmitter and receiver. This led us on a helpful tangent into the study of the electromagnetic spectrum. 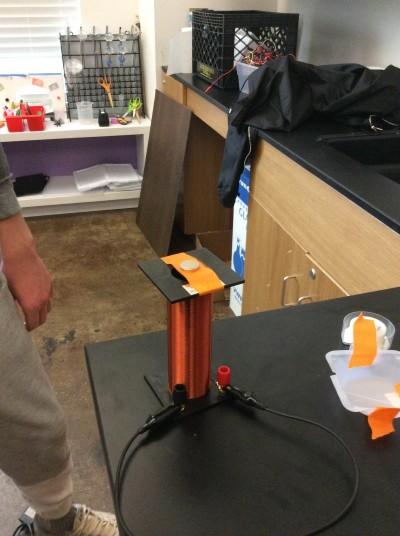 Equipped with the knowledge that electromagnetic waves take many forms—radio, infrared and visible light for our working purposes—students set out on a new challenge. How could they transmit the signals from their microphones over a greater distance? Students used coils of wire, LED light bulbs and photoreceptors to build signal transmitters. They encountered a problem common to the communications industry, though. These devices worked only over very short distances. They had much more success sending a simpler signal. It was much easier to tell when the signal was on or off than to measure the wave form itself. The on/off messaging system has its advantages; the binary system by which all of our devices communicate relies on similar properties. This was the final piece of the puzzle!

After a quick study of digital signals and binary coding, students were finally able to design a system to send and receive messages to their teammates across the room. They could send text and even images by encoding numbers, letters and pixels into simple “on” and “off” patterns. Their final assignment was to send and receive a text and explain how the signal traveled through each stage of this primitive “cell phone.”

The six weeks of study took them on a journey through sound and light waves, AC and DC circuits, electromagnetic induction and analog and digital signals. We were impressed by their grit, determination and design prowess. They were relieved, we’re sure, to retire to their iPhones at the end of the unit.

We hope this exercise was as exciting for our ninth grade students as it was for their teachers. At times, we pushed them further than we had anticipated, and they embraced the challenge wholeheartedly. While every teacher hopes his or her students carry the lessons of the classroom with them for the rest of their lives, we are convinced these students will carry an appreciation of the science behind these incredible communication devices with them and not have to sit and wonder, as many of their peers might, how this marvel of modern technology functions.

This is part 3 of a three-part series of articles on integrated science at Avenues. Skip back to part 1 and part 2.