In Part I of this series, I introduced two ideas that emerged in K-12 education in the West in the late-20th century: 1) the need for a science curriculum that builds on foundational knowledge, in a particular sequence, and at a developmentally appropriate rate and 2) the benefits of blurring the lines between the traditional disciplines across the curriculum, including in science, between physics, chemistry and biology. In the science department at Avenues, these ideas have inspired us to update and enrich the experiences we provide our students in the classroom.

At Avenues, we have developed a course of study simply called “Science.” Studying phenomena (currently at the center of Finland’s laudable reform efforts to replace “teaching by subject” with “teaching by topic”), tapping into the innate curiosity of students, identifying patterns and laws that govern the universe and its myriad, diverse constituents, is no small task. In an effort to more adequately address the modern intellectual landscape of science, which is increasingly dominated by research into the origins of life on earth, climate change, drug-resistant bacteria, overpopulation and artificial intelligence, we have developed a program that applies the best principles of a physics>chemistry>biology sequence and includes connections to important modern issues like the environment, communication, adaptation and energy resources, as well as engineering design. 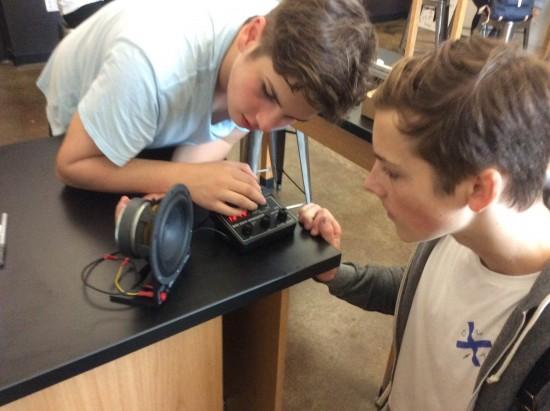 Ninth graders work on an exercise related to their waves and communication unit.

SCIENCE FOR THE CONSUMER

The theme for our ninth grade course is what we internally call “science for the consumer.” We want students to think about objects in the world around them, ask questions and, more importantly, begin to define on a meaningful scientific level how those objects are structured, what makes them different and what makes them work. Is this physics? Chemistry? Biology? We don’t like to label. The year begins with an in-depth study of the nature of matter. In this “material” science unit, students explore questions about the nature of materials, their atomic and molecular structure and the electrical forces that hold them together. The second half of the year shifts toward a study of waves through communication devices and culminates in a mechanical-engineering design project that requires the study and application of forces and motion.

SCIENCE FOR THE CITIZEN

Students in the tenth grade follow up this experience with a deep investigation into modern energy sources, including the generation and transformation of energy and the nature of the resources that provide it. This leads naturally into an exploration of the ecosystem in which we live, with a particular focus on the chemical reactions that occur in the atmosphere, biosphere and hydrosphere and other relevant interactions between humans and their environment. We consider this the Avenues take on “science for the citizen.”

SCIENCE FOR THE SELF

The 11th grade science curriculum culminates in our study of “science for the self,” in which the life sciences take center stage. Students explore the processes that occur within and between living organisms, including reproduction, genetics, evolution, adaptation and disease, while making connections to the chemical environment and physical systems studied in prior coursework.

This is part 2 of a three-part series of articles on integrated science at Avenues. Go back to part 1, or continue reading with part 3.