Chinese Immersion through the Eyes of an Adult Learner

By Grace Jackson, Editor and Translator for China-related Media

As someone who began learning Chinese at 22 out of a desire to become fluent in a second language and a curiosity about Chinese culture, I was excited to wander through the corridors of the Early Learning Center when I first joined the Avenues staff last fall. Touring Chinese immersion classrooms was a gleeful experience: every object—from a box of crayons to the classroom sink—was labelled in Chinese. But, I wondered to myself, how do these classrooms function day to day? What happens when you place a group of very young children into a foreign language environment and ask them to go on as usual? And how is their experience of learning Chinese different from mine? 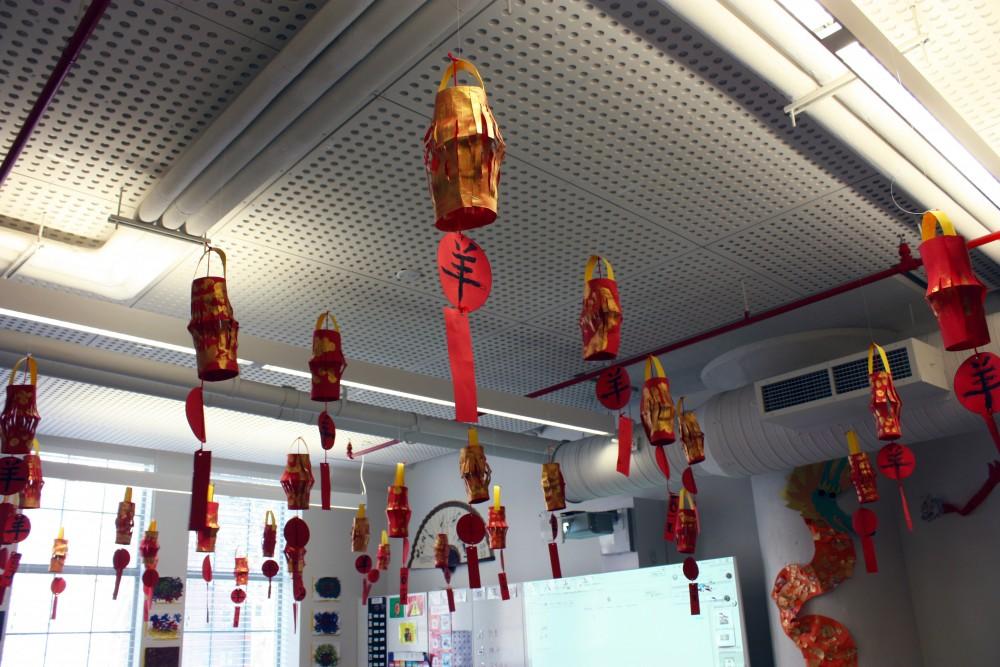 Earlier this year, I spent a day in a pre-K Chinese immersion classroom at the Early Learning Center trying to find the answers to these questions. I arrived at 8:05 in the morning to find Teacher Zhuo and Teacher Li preparing for the imminent arrival of 16 zise de niao, or “purple birds.” (In the ELC, classrooms are identified by color, and classes are named after animals.)

Soon after their arrival at 8.30am, the children were absorbed in a playtime activity of their choosing. During this first hour, the purple birds were reluctant to respond to me in Chinese. It was clear, however, that they understood every syllable that their teachers and I spoke to them. I asked one boy, who was concentrating fiercely on the paper in front of him, what he was drawing. “Ni zai hua shenme?” “A restaurant,” he replied. Sometimes the process seemed attritional, a quiet battle of wills: the children were never chastised for speaking English, but the teachers, gently persistent, spoke nothing but Chinese. 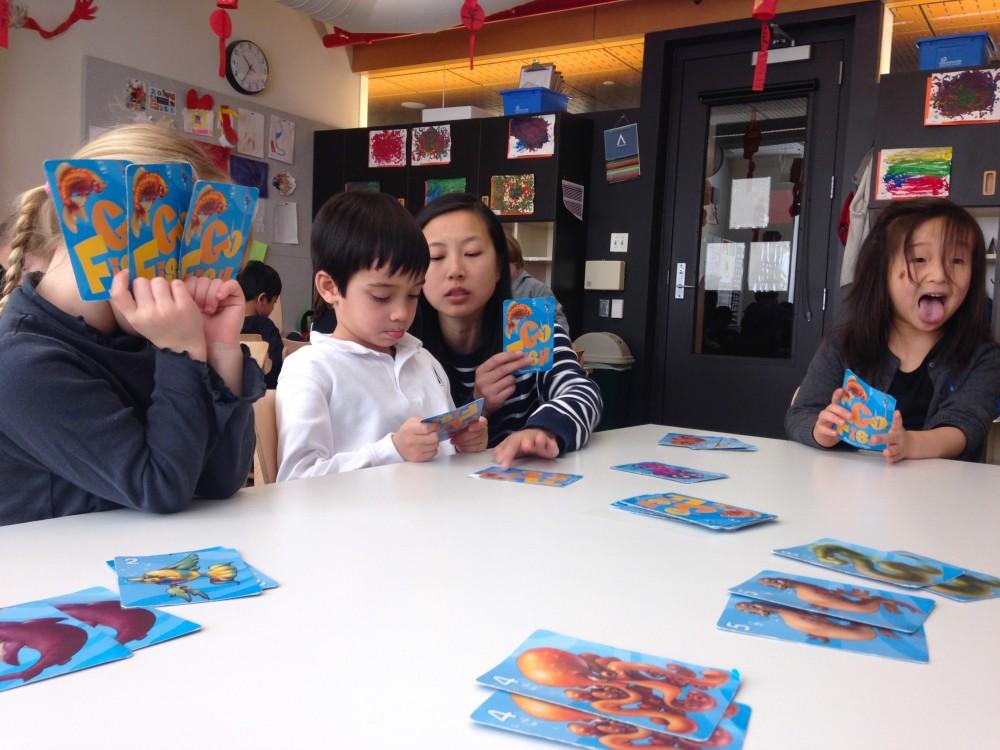 Soon enough, those efforts paid off. During the second play session of the day, I witnessed several children play a round of the card game Go Fish, supervised by Teacher Li. Seeing the children use Chinese to ask each other breezily if they had a dolphin or an octopus card, and respond, “meiyou, qing diaoyu” was exhilarating. The stimulation of play combined with the raised stakes of competition seemed to inspire a very pure form of focus in them. I also got to brush up on my marine biology vocabulary and learned the word for “jellyfish.”

I began learning Chinese in 2009 as a visiting student at Harvard. At that time, I had no idea that my desire to become fluent in a second language—I regretted not taking languages more seriously at high school—would lead me to spend two years in Taiwan and another two at graduate school. When I told people that I was going to begin studying Chinese in my early twenties, they responded with incredulity. Encouraging smiles gave way to mumbled references to the fact that it’s hard—really hard—for monolingual adults to become fluent in a second language.

Those people were right. It was hard—at times, excruciating—and often humiliating. At Harvard, first-year Chinese meets for one hour, every day of the week, at 8:00 am. I was the token graduate student in a room full of preternaturally industrious, shiny-bright Harvard freshmen not yet addicted to coffee. By the end of the second week, I realized that there was a tangible difference between the rate at which an 18-year-old brain and a 22-year-old brain absorb new information. It simply took me longer—sometimes days longer—to internalize all those strange new sounds and attach them, in my mind, to the even stranger symbols in the textbook. In order to add a syllable to our vocabularies, we had to write a character over and over again while speaking it aloud. Ni, ni, ni, ni. Hao, hao, hao, hao. 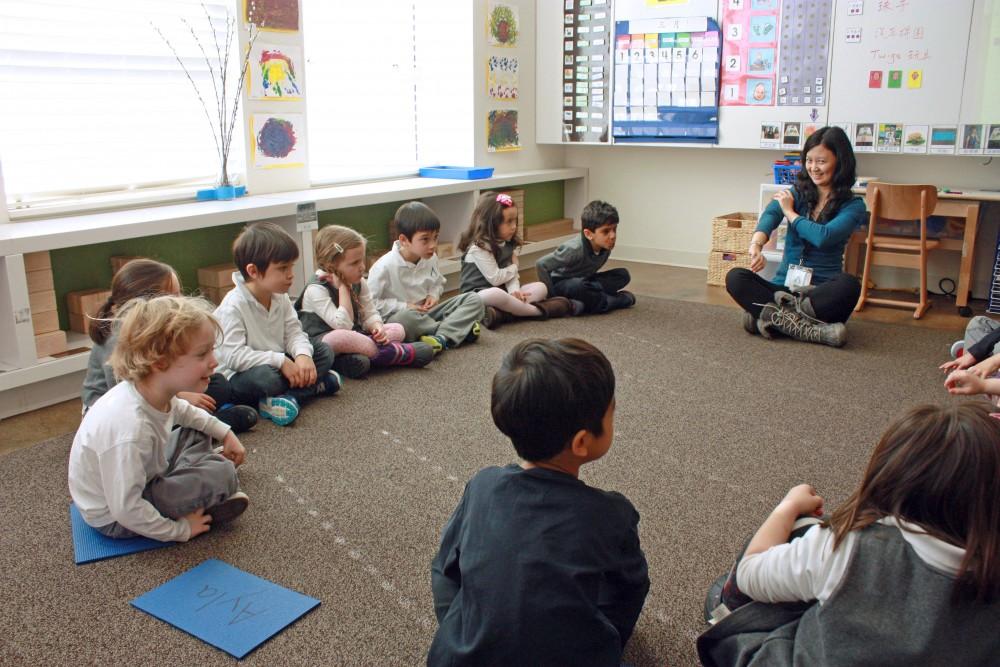 The purple birds, however, approach Chinese like Chinese children do. They don’t study Chinese, as I did, with flash cards, taped dialogues and endless notebooks; they learn Chinese, by observing and mimicking adults who support them through work, rest and play. Children in the ELC are not made to practice writing characters, but spend their days learning Chinese as though the whole language were a song. Freed of the obligation to visualize the characters while speaking, the children can attend fully to the rhythms and melodies of speech—a crucial advantage in a language that relies on tonality to convey meaning. By the time they get to Lower School, they’ve already internalised the spoken vocabulary necessary to see them through their daily lives. Then, like their Chinese counterparts, they are ready to begin connecting familiar sounds to unfamiliar symbols.

Crucially, in the immersion classroom, children acquire the new language as a communication tool and not a performance piece. Chinese is not a foreign language, but a means of getting what you want (water, more blue beads, a cheese sandwich instead of a ham sandwich) or need (a trip to the bathroom, help tying your shoes, a napkin to clean up the cake that you just dropped on the floor). I spent two years staging various versions of Chinese for my teachers in Taiwan before I became truly comfortable riding the bus or calling a native speaker on the phone. I got there in the end, but only after a period of anxiety and self-doubt, which it seems the purple birds will simply bypass on their way to fluency. And while I don’t regret the long and winding path that I took to my second language, I hope that one day such a path will be rendered obsolete by immersion, and that every school will be able to follow the example of Avenues.